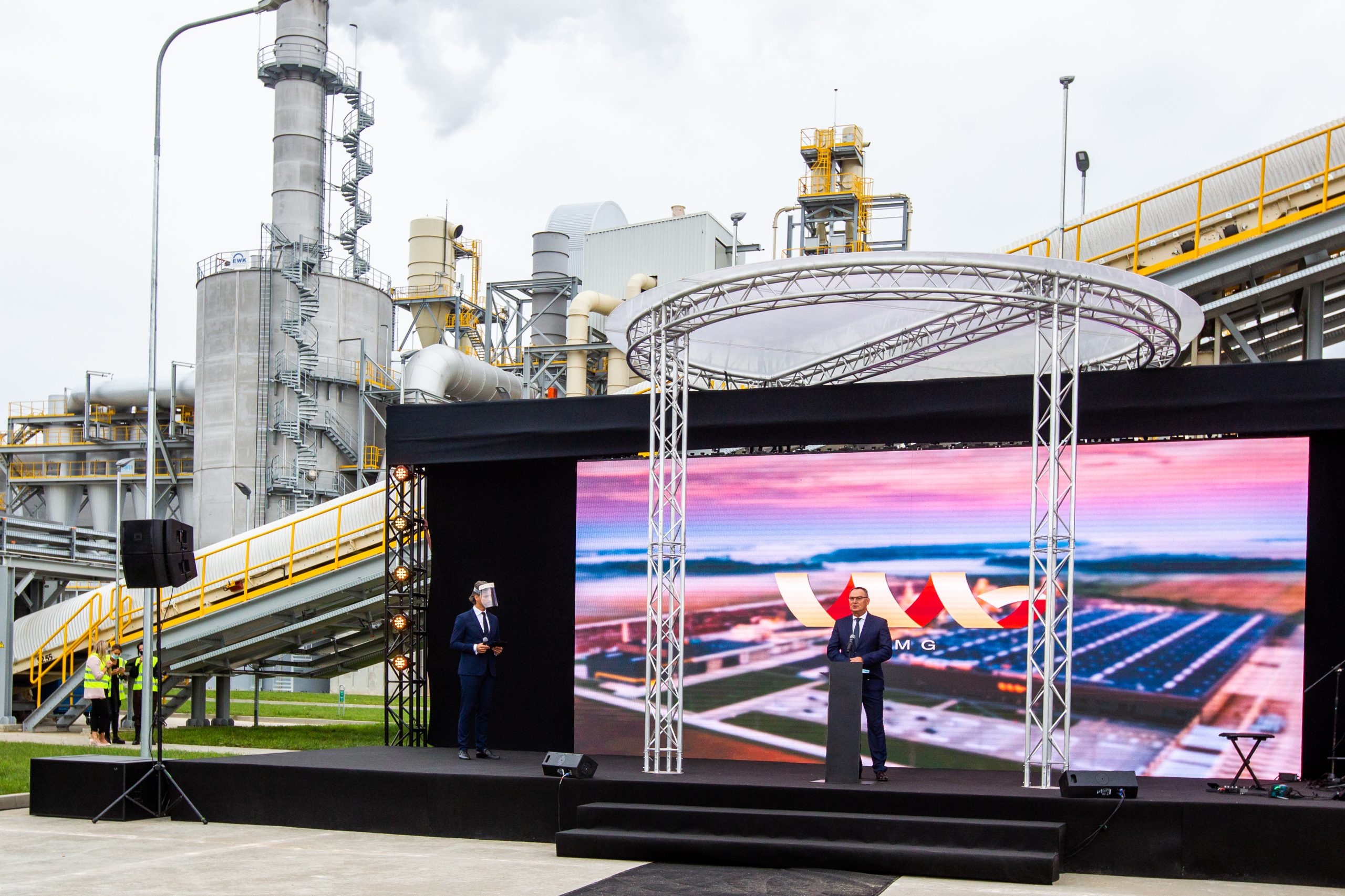 Krefeld, September 18th, 2020 – the grand opening of one of the most modern particle board plants in Europe, which Klaipedos Mediena (VMG) operates in Akmene, Northern Lithuania, was scheduled for September 4. After the first board was produced on July 31, the ceremony marks a milestone in what is now the third greenfield particle board plant that VMG has ordered from Siempelkamp.
After the two particle board plants, “Giriu Bizonas” in Lithuania and “VMG Mogilev” in Belarus, VMG has now commissioned a third plant with its partner, Siempelkamp. The plant in Akmene supplies material for VMG’s rapidly expanding furniture and kitchen production. For many years the company has been manufacturing exclusively for IKEA. Thus, VMG is one of the key players responsible for the positive development of production capacity in the Baltic States and adjacent countries, and in the future will also supply other Lithuanian manufacturers with raw particle board.
The Siempelkamp partners were unable to travel personally to the grand opening in early September due to the corona protective measures – however, several people involved in the project sent their sincere congratulations to VMG Chairman Sigitas Paulaskas, his team and the invited guests. “We regret that we are unable to personally celebrate this milestone with you. In these challenging times, we are proud that we have been able to support VMG, now for the third time, with our plant technology – and thus contribute to the fact that in Akmene one of the world’s most modern, most economical and most sustainable particle board plants is going into production”, said Ulrich Kaiser, Head of Sales Wood Division at Siempelkamp, in his greetings to the invited guests.
The new plant is a model of resource-efficiency, ideal board properties, and the utmost energy-efficiency. The plant’s production spectrum is also trend-setting; the plant is equipped with a specially-developed, thin-board package that enables profitable production, starting with a board thickness of 3.0 mm. An innovative glue technology for low-formaldehyde or formaldehyde-free glue systems is also used. EWK Umwelttechnik’s WESP filter technology, which is designed to meet the highest environmental standards, stands for “Best Available Technology” in this field. The control technology includes the innovative SIEMENS S7-1500 TIA Portal, as well as Siempelkamp’s Prod-IQ® control system. The centerpiece of the plant is a ContiRoll® Generation 9 continuous press for particle board in 8‘ x 45.4 m format; daily production capacity is 2,000 m³. The overall concept is considered a benchmark in the field of environmental technology specifications.
VMG is also the first customer to commission an innovation: A RoundTrack® carriage, which moves knife rings between the Pallmann knife ring chipper and the sharpening robot. RoundTrack® meets knife ring – what exactly is the customer benefit? On the one hand, the use of the Strothmann concept stands for more safety, because large knife rings weighing approx. two tons can be transported more safely on RoundTrack® than on a trolley. The Pallmann knife ring in itself is already an advantage – such king-size chippers are ideally suited for efficient machining in the plant with high performance.

In addition, Siempelkamp’s entire portfolio of technology for wood-based materials is also included: Size-reduction technology and front-end technology from Pallmann and CMC, planning from Sicoplan, and a Büttner drum dryer. All common board formats in Western Europe and Eastern Europe are processed on the downstream sanding and cutting line and then packed or directly further processed into furniture parts.